Eagle Art in US Coins: 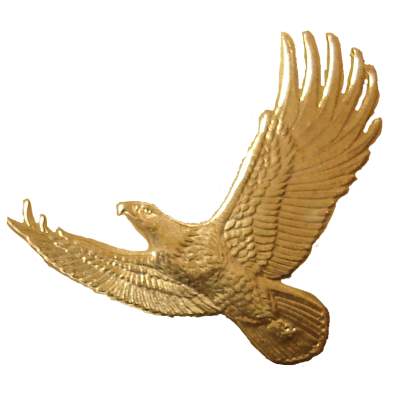 Free Eagle in Flight enhances the extraordinary reverse of the Sacagawea Golden Dollar by lifting the eagle out of the limits of the coins context to better represent the freedom and uplifting dimension of the fight of an eagle. The presentation inspires viewers by focusing on the flight feathers of our bird, adding depth to the design with the judicious use of lighting to accent the feathers with reflective white light while accenting dimension with the darken tail feathers. The complete affect causes the image to nearly jump off the canvas into the viewers personal space.

From the beginning of US coinage the American Bald Eagle had taken its role as the national symbol and displayed both naturally and symbolically. Symbolic Eagles started with early Silver Dollars. The gamely representation of a proud, if not a bit perturbed bird with almost a folks art presentation. In truth, this early eagle was difficult to distinguish from a dove or seagul. But the representation and variations remain on American coinage until about 1798 or perhaps later when two different eagle designs came into use, one heraldic and symbolic, and the other more naturalized but with a stronger use of naturalist technique. 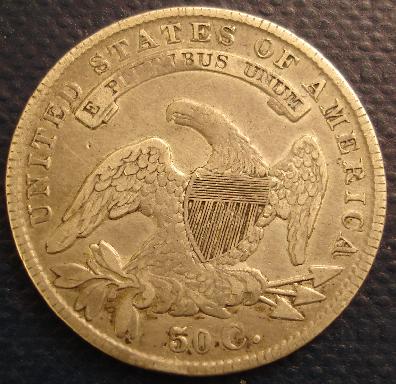 The break through of Eagle design came with the rare Gobretch Type sitting liberty dollars, who's design was lifted and used with only the slightest modification on the Flying Eagle small cent.

Putting the eagle in flight gives the coin a more attractive look although the design seemed to challenge the technology of pre-civil war America and it wasn't again until the Golden Dollar was released that the public then had a soaring eagle on a coin. It is worth mentioning that in 2009 the reverse of the Sacagawea Golden Dollar with change so it might be a long time before eagles soar on our coinage.